I am a literary scholar by training and I am interested in Shakespeare’s works, especially in the way his works are interpreted in contemporary literature and art. In this regard, the Georgian director Robert Sturua’s contribution to the global history of staging and interpreting Shakespeare is special, and we can easily say that he created a world that we can call “Sturua’s world of Shakespeare”. Researchers and scholars want to know how Shakespeare’s texts are staged and how contemporary creators and contemporary thinkers understand the problems raised in his Julius Caesar. This documentary is my attempt to show these processes at work.

Julius Caesar Fragments. So, I didn’t stage the entire play – just the final 10-minute scene following Caesar’s murder. This in itself is a novelty of sorts because in the play, there is this typical idea, one that is fully incorporated into American films these days, that if a man commits some crime, a murder, God will definitely punish him. A criminal protagonist never wins in American cinema. The action takes place in Chicago, during that cutthroat gangster period. I touch on that in the play. I compare politics to mafia structures. David filmed rehearsals and you, too, will see what the work of actors and a director is, …[Documentary] is, indeed, a genre, the theatre itself needs it, and we need it to see our own work through someone else’s eyes.

PhD in Philology, an Associate Professor at Ivane Javakhishvili Tbilisi State University; trained literary historian. Currently Academic Fellow at REES, University of Oxford as part of the Georgian Progamme. David Maziashvili is the author of over 10 academic articles on Shakespeare, Postmodernism, Tom Stoppard, Shakespeare’s reception in contemporary English literature and theatre. He is the author of Tom Stoppard and Postmodernism (2014). In 2015, at Tbilisi’s Rustaveli Theatre, he shot a 38-minute documentary, ‘Robert Sturua’s Julius Caesar, Fragments From Performance Rehearsals.’ David’s research interests include Tom Stoppard, postmodernism, Shakespeare’s transformation in the Second Half of the 20th and in the 21st century English literature, English drama and English and Georgian theatre.

David Maziashvili is a former advisor for educational and academic affairs to Sturua at the Shota Rustaveli State Drama Theatre. Since 2016, David Maziashvili has been the Managing Director of the Giorgi Aleksidze Tbilisi Contemporary Ballet Company.

David is also a chorister. Between 1999 and 2012 he was a member of the patriarch’s choir at the Tbilisi Trinity Cathedral, while since 2005, has been a chorister at the Georgian folk ensemble Shavnabada. 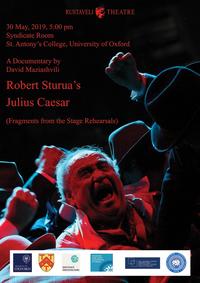