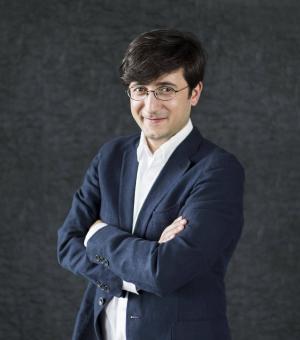 David Maziashvili is the author of over 10 academic articles on Shakespeare, Postmodernism, Tom Stoppard, Shakespeare’s reception in contemporary English literature and theatre and the monograph Tom Stoppard and Postmodernism (2014) (a copy is in the Bodleian Library). In 2015, at Rustaveli Theatre, he shot a 38-minute documentary, Robert Sturua’s Julius Caesar, Fragments From Performance Rehearsals.

In 2016, David won Shota Rustaveli National Science Foundation’s State Science Grant Competition for Young Scientists’ Research Internship Abroad with his project entitled Reception of Shakespeare in the English Literature and Theatre in the Second Half of the 20th and in the 21st Century, and in 2017 visited Faculty of English at University of Oxford for three month in order to conduct his research internship there.

David Maziashvili is a former advisor for educational and academic affairs to Shota Rustaveli State Drama Theatre Artistic Director Robert Sturua (from 2014 until and including 2016) and a co-organizer of numerous international, national and student academic conferences and an author and leader of art educational-intellectual projects. The most notable and famous of these is the series of art education projects Sturua’s World of Shakespeare (from 2013 until and including 2016).

Since 2016, David Maziashvili has been the Managing Director of Giorgi Aleksidze Tbilisi Contemporary Ballet Company.

David is also a chorister. Between 1999 and 2012 he was a member of the patriarchy choir at the Tbilisi Trinity Cathedral, while since 2005, has been a chorister at the Georgian folk ensemble Shavnabada.

David’s research interests include Tom Stoppard, postmodernism, Shakespeare’s transformation in the Second Half 20th and in the 21st century English literature, English drama and English and Georgian theatre.

If you missed Georgian Dr Maziashvili's 'Shakespeare in Georgia” event, which took place at the Weston Library, Bodleian on 21 January 2020 you can view a video about the event here: https://www.youtube.com/watch?v=pWcyX6hjf6E