I spent three months in Zürich this summer, conducting interviews and participant observation. I interviewed 20 individuals with a migration background from the former 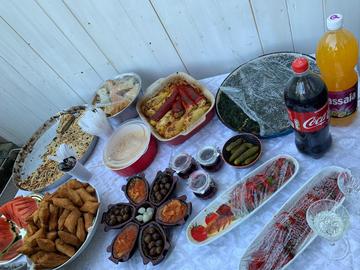 Yugoslavia. They (or their parents) came from different parts of the region at different points in time and had a variety of professional backgrounds. Examples of participant observation included attending a Q&A session with Haris Škoro, who played for the Yugoslavian national team and later for FC Zürich; attending a Balkan folk concert; watching a rehearsal led by Minka Kamberović, a prima ballerina from Sarajevo, now ballet teacher in Zürich; and hosting an Albanian dinner party with one of my participants.

My thesis explores identity negotiation and conceptualisations of the ‘homeland’ among first- and second-generation migrants from the former Yugoslavia in Switzerland. Studying this population can enrich research into migrant identities because the political, economic, and social contours of the country of origin have changed radically since their migration between the 1960s and 1990s. The notions of ‘home’ and ‘origin’ are destabilised, and migrants navigate several categories of varying degrees of acceptability, namely ‘Balkan’, ‘Yugoslavian’, as well as their specific ethnic identities (e.g. Serbian, Albanian, or Bosnian). This thesis maps out the discursive construction of these categories, with their geographic, cultural, and political dimensions; the relationships between them; and their use for identity negotiation. Moreover, it argues against the common association of the ‘home’ or ‘homeland’ with the country of origin, proposing a more dynamic approach to studying the role of place in identity construction, which allows for a greater degree of ownership of the ‘host’ culture.

This thesis is qualitative and focuses on the use of discourse and narrative, following individual stories with all their detail. It aims not to make universal claims about identities and ‘homelands’, but hopefully all studies within related fields could draw on the insights it provides. I hope that this thesis will provide a more nuanced understanding of migrant identities, as well as of the ways in which individuals make sense of the ambiguous cultural and ethnic contours within the region of the former Yugoslavia.