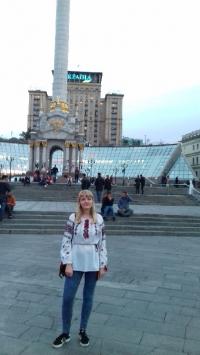 My thesis project focuses on nationalist movements in the western republics of the USSR. I am comparing the People’s Movement of Ukraine (Rukh) to nationally-oriented movements in the Baltic republics, investigating what lessons Rukh drew from the Baltic experience. My qualitative comparative study looks at the similarities and differences between these movements and the differing circumstances that caused these differences.

As my project has a strong focus on Ukraine, in September 2017 I conducted fieldwork in Kyiv. My fieldwork had two main components: research in the Central State Archive of Public Organisations of Ukraine and interviews with former members of Rukh and activists involved in independent movements in late Soviet Ukraine. The Central State Archive in Kyiv contains a special Rukh archive, rich with resources concerning their political activity during 1988-1991. Speeches, official documents, policy proposals, newspaper coverage and correspondence found in the latter archive were particularly useful, seeking to prove that communication between Rukh and the Baltic popular fronts did indeed occur.

Interviews with former members of Rukh and nationally-oriented activists proved very fruitful but was also a very challenging task. I was incredibly fortunate to have had the opportunity to interview the founder of the movement, Ivan Drach, as well as former Ukrainian ministers of Education and Ecology, the former mayor of Kyiv, numerous MPs and Ukrainian academics. These high-ranking politicians provided me with invaluable insights into Rukh as a nationally-oriented movement, the policies that it chose and the reasoning behind these policies.

The conclusions that I am drawing from my project have been mixed. Despite the fact that a lesson-learning process did indeed occur, my fieldwork in Ukraine showed that the extent of nationalist diffusion in the late Soviet Union should not be underestimated. The Baltic popular fronts were indeed a guiding point for Rukh, but domestic factors and a general course of liberalisation in the late Soviet Union were crucial catalysts for these movements.

I am very grateful to the REES Travel Grant, which really helped me alleviate the costs of this project. It is great for REES students to know that their department supports them and encourages them to do fieldwork.