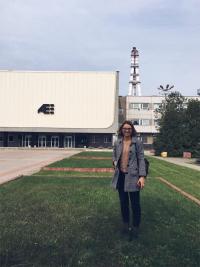 The main interest of my research is perceptions of the state held by the people living in the specific regions of the Baltic states, distinguished by the ethnic composition of their populations (with the majorities of Russian-speakers); the severe socio-economic situations; and the specific historical circumstances of their formation. The question being addressed in my project is how "the state" is imagined at the local level through the everyday encounters with the street-level bureaucrats.

Focusing on the specific mono-industrial towns built during the Communist-era, I chose Visaginas as the case of my study. It is a border town in Lithuania, built in 1976 as an urban settlement for the Ignalina Nuclear Power Plant (INPP), that was supposed to become the largest nuclear power plant in the world. Due the importance of nuclear energy, Visaginas was built as a specific island, different from any other town in Lithuania. With the collapse of the USSR, it experienced not only general difficulties of transition, but also had to re-position itself in the new post-socialist context. The situation was altered further on with Lithuania becoming a member of the European Union, resulting in the closure of the INPP, compared to the loss of "the mother" by the inhabitants of Visaginas.

Being puzzled with the complexity of issues surrounding this town, I have spent two months (from mid July to mid September) of my fieldwork in Visaginas. I was conducting institutional ethnography, focusing on the local municipality and its effects on the everyday lives of the residents of the town. I have attended local celebrations, events, and public meetings; I have been volunteering at a local association; interviewing both the ordinary residents as well as the civil servants. Overall, I was simply living in Visaginas, trying to understand the everyday rhythm of the town while at the same time deconstructing the images of the state prevalent among the people there.

The conclusions of my work will focus on the specifics of both the nature of mono-industrial towns and the particularity of the nuclear industry and how these affect the ideas and associations people hold about the state as well as their relationship with it. I hope to complement the existing literature on state anthropology with a case in a post-Communist context, focusing on a highly educated, self-confident population, with the strong feeling of ownership over the town, yet relatively isolated due to the historic and socio-economic conditions.