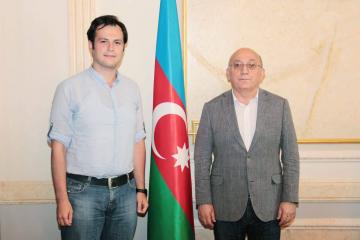 My research project is a study of Azerbaijan-Russia relations (2008-2016) from a small state perspective and aims to engage with the debate in International Relations (IR) literature of theories. With the Georgian war, Russia directly conducted a military operation against a sovereign state for first time after the collapse of the USSR. The war in the South Caucasus and more recently the Ukrainian crisis proved Russian readiness to use hard power in its ‘near abroad’. The assertive Russian foreign policy in the region narrowed the maneuver space of the small states in its immediate neighborhood. Interestingly, Azerbaijan, as a small state could choose ‘not to choose’ between the West and Russia. I am interested in conceptualizing the foreign policy strategy chosen by Azerbaijan, and showing how this explains the country’s international relations with Russia in the post-Georgian war period.

As a part of the research project, I conducted elite interviews in Baku over the summer of 2017 to learn various Azerbaijani elites’ explanations for the country’s foreign policy strategy, particularly towards Russia after 2008. In September, I did 20 interviews with independent foreign policy experts, academics, MPs, diplomats, opposition leaders and high-level government officials. During my fieldwork time in Baku, I read Azerbaijani language books, journals, and documents on Azerbaijan-Russia relations in different university libraries. Beside this, I had an opportunity to visit various strategic research centers for conducting interviews with senior researchers who provided their published reports about the topic.

The fieldwork in Azerbaijan helped me to analyze Azerbaijan-Russia relations from the small state perspective deeply. I learned more about the roles of the different foreign policy institutions in formulating and managing the inter-state relations. I recognized similarities and differences in elite perceptions of the Azerbaijani foreign policy towards Russia.

(Photo shows the Chairman to the State Committee on Religious Associations of the Republic of Azerbaijan).