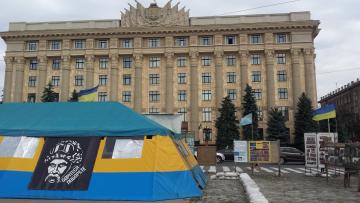 I spent two weeks in a beautiful, freezing Kyiv in January 2017, and then returned in July 2017 to spend a week in Kharkiv, before travelling to Lviv for a week. Thanks to personal contacts and contacts through the university, I was able to reach out to a wide variety of interviewees – from students, to professionals, to artists, to academics, and to soldiers. I managed to conduct around 15 interviews in each city, in Russian, Ukrainian and English. Ukraine is a country known for its regional divisions, so it was important for my research to speak to people from across the country, who travelled to the capital for the protests. I found it extremely interesting to meet with so many different people, and learnt a great deal about ordinary citizens’ experiences of the revolution. I was touched by the number of people willing to share their time and their story with me, and who helped to put me in touch with other interviewees.

My findings so far indicate that symbols and slogans of the revolution can be divided into three groups – those which are EU focussed, those with a civic focus, and those which are more nationalist in their origins. My most interesting finding is that slogans and symbols with origins grounded in controversial nationalist movements during Ukraine’s past have became more mainstream over the course of the protest, and have evolved in meaning to fit the contemporary context. It also appears that slogans and symbols played an important role in uniting a wide variety of individuals in protest, and motivating them during this largely leaderless, grassroots movement.