Screenings of Georgian women’s films at the Taylor Institution 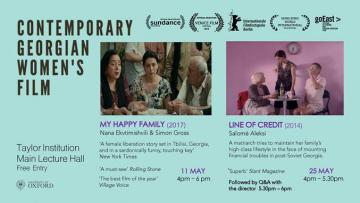 The Russian Sub-Faculty is pleased to announce two screenings of contemporary Georgian women’s films. Federico Fellini once described Georgian film as “a completely unique phenomenon...vivid, philosophically inspiring, very wise.” The country’s rich cinematic heritage is on the rise again thanks to a new wave of prize-winning films by female directors, two of which you can discover this May at the Taylorian.

On 11 May (4-6 pm), we will show My Happy Family, a 2017 drama film directed by Nana Ekvtimishvili and Simon Gross. The Village Voice named it as “the best film of the year”. The New York Times describes the film in the following way: “A female liberation story set in Tbilisi, Georgia, and in a sardonically funny, touching key.” Screening time 120 minutes.

On 25 May (4-6.45 pm), we will show Line of Credit, a 2014 comedy-drama film written and directed by Salomé Alexi. The film pictures how a matriarch tries to maintain her family’s high-class lifestyle in the face of mounting financial troubles in post-Soviet Georgia. The Slant Magazine comment about this film is short and straightforward: “Superb.” Screening time 125 minutes. The screening will be followed by Q&A with the director.

All screenings take place at 4 pm in the Main Lecture Hall, Taylor Institution (St Giles’, Oxford OX1 3NA). The films will be shown in Georgian with English subtitles. All events are free, and everyone is welcome!