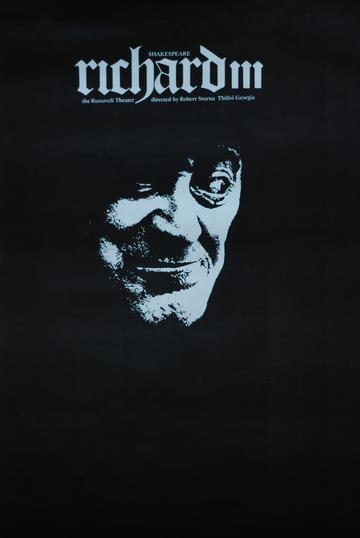 Shakespeare’s Richard III staged by Georgian stage director Robert Sturua at the Rustaveli National Theatre, Tbilisi, Georgia in 1978; Ramaz Chkhikvadze in the title role. Creative team: Stage designer M. Shvelidze and composer G. Kancheli. Innovative interpretation of the Great Bard’s play and aesthetic of the production got high acclaim in Edinburgh (1979) and then in London (1980).

"The stage director of the Rustaveli Company Robert Sturua (not least the composer Gia Kancheli) showed us that the Georgians can teach us more than a thing or two about the production of Shakespeare." The Guardian

"Londoners must see this play produced by one of the greatest companies in the World." Times

"The fanciful variety of Richard III, presented by the Rustaveli Company at the Lyceum, is such a magnificently performed production that, like Verdi’s Othello, it could easily be considered as an independent pierce of art." Daily Telegraph

Refreshments will be served in the interval

You can see more from the Rustaveli National Theatre here.