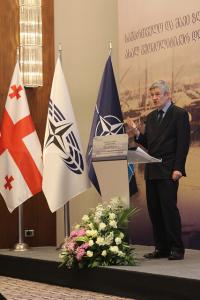 Roy Allison gave the keynote presentation in Batumi, Georgia, at a regional conference of the NATO Parliamentary Assembly in cooperation with the Parliament of Georgia, 23-25 April 2018. He spoke on the topic of ‘Russia’s evolving strategy and how this influences the security situation in the South Caucasus and the wider Black Sea region’. He spoke after the introductory panel for the conference which was addressed among others by the President of Georgia, Giorgi Margvelashvili; the Minister of Foreign Affairs of Georgia, Mikheil Janelidze; the Defence Minister of Georgia, Levan Izoria and the President of the NATO Parliamentary Assembly, Paolo Alli.