This past summer, I spent the month of August studying on a language program in Moscow. Though I spent much of my undergraduate degree focused on Russian politics, and of course, continued to 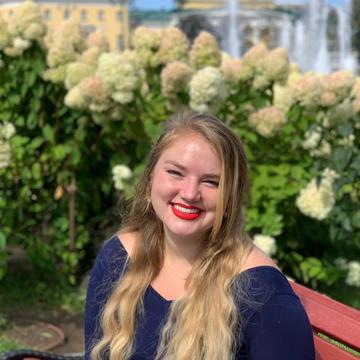 pursue study of the region as a REES MPhil, this was my first time visiting Russia. This was an invaluable opportunity to not only further my study of the language, but to deepen my understanding of Russian history and culture, which will play an integral part in writing my dissertation.

My thesis focuses on the role of Russian international identity in the creation and continuity of Russia’s foreign policy behavior in the CIS since the early 1990s. The aim is to investigate the way that identity shapes behavior in the international system, and for Russia specifically, the way that self-identification as a “Great Power” shapes its international actions. I plan to do so by tracing the trajectory of Russian policy, language, and behavior toward Ukraine and Kazakhstan against the background of the massive domestic and international political shifts that have occurred between 1992 and 2016.

Overall, my thesis will seek to explain why, despite the striking change that has occurred in Russia and globally since the dissolution of the Soviet Union, Russia’s proprietary language and policy have remained largely unwavering.