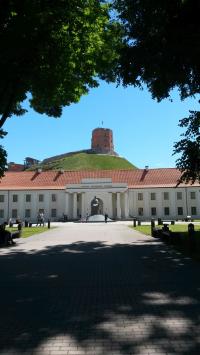 My thesis project is about contemporary Lithuanian collective memory (1940-1953) and how Lithuanian society and politics are still affected by these memories, even when the people “remembering” them are only in their 20s and 30s with no first-hand experience of the events in question. I spent July and August 2017 in Vilnius in order to conduct interviews with people between 18 and 45 who have taken the state history final exams in independent Lithuania, teachers and school administrators, and government figures to determine first what the commonly accepted “Lithuanian” narrative about this time is, second to figure out what forms it as young people grow up, and third to compare and contrast it with other narratives that may also exist alongside it in the country today.

What I mostly found was that there is really only one broadly accepted narrative today and that minority ethnic groups such as Poles, Jews, or Russians tended to echo either the mainstream Lithuanian narrative or else accepted narratives based outside Lithuania- generally from Poland, “the West,” or Russia, respectively. My original plan of comparing and contrasting competing narratives wasn’t feasible, and so I shifted my emphasis onto mapping the mainstream Lithuanian narrative and showing how and where it affects society today. The narrative is centered around four key events, three of which are discussed and a fourth which is very deliberately not. The first three are the lack of resistance to the first Soviet occupation in 1940, the deportations of Lithuanians under the Soviets in June 1941, and the partisan war against the Soviets during their second occupation from 1944 to 1953. The fourth event, which is not discussed, is Lithuanian participation in the Holocaust and the mass killings of Jews.

What I hope to achieve with this is twofold. I would like to help Lithuanians come to terms with their own history- Vergangenheitsbewältigung, “the struggle to overcome the negatives of the past” as it is succinctly put in German. I would also like to make Lithuanian history more accessible to those not already intimately familiar with the country and to present a more nuanced version of “what really happened” so that events can be more fully understood within the context in which they took place. The events that occurred from 1940 to 1953 remain extremely relevant publicly and privately, and are vital to understanding Lithuania as a community today.