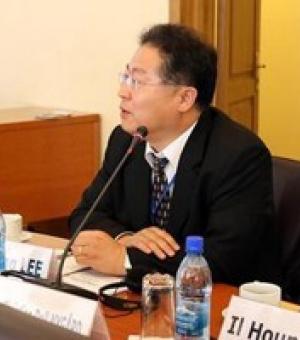 Dr. Jae-Young Lee is currently research fellow at Korea Institute for International Economic Policy (KIEP), a leading governmental economic think tank in Korea. He is also president of the Korean-Central Asian Economic Association and adjunct professor of Graduate School of International Studies at Hanyang University. He is Honorary Professor of Economic Research Institute of the Far Eastern Branch of Russian Academy of Sciences as well.

Dr. Lee has over 17 years of professional experience as an economist and academic in the fields of Russia & CIS economies. He worked as a research professor at the Asia-Pacific Research Center of Hanyang University. He served as a visiting scholar at Davis Center for Russian and Eurasian Studies at Harvard University and Center for Russian and East European Studies at University of Michigan. He was a director of Planning and Research Coordination Department at KIEP. He was also a member of Advisory Committee at National Unification Council under the President of the Republic of Korea.

Dr. Lee got Ph.D. in economics at Moscow State University in Moscow and Master’s degree in business administration at Hanyang University in Seoul. He also received an honorary doctorate from the Chinggis Khaan University in Mongolia.