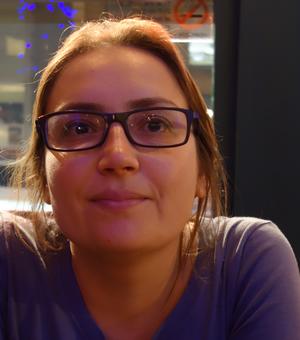 Dr Agnieszka Kościańska received her PhD in 2007 and habilitation in 2015 in ethnology/cultural anthropology from the University of Warsaw, Poland. She is Associate Professor in the Department of Ethnology and Cultural Anthropology, University of Warsaw. Her research interests include gender, sexuality, queerness, sexual violence, religion, race and racism in Central Europe. In the past, she was a visiting fellow at Harvard University (2010-2011, Marie Curie fellowship), the New School for Social Research (2006, Kosciuszko Foundation grant), the University of Copenhagen (2005, Danish Governmental scholarship), Edinburgh College of Art (2017, European Visiting Research Fellowship by the Caledonian Research Foundation and the Royal Society of Edinburgh) and the Imre Kertész Kolleg Jena (2016, 2017-2018).

She is the author of To See a Moose: The History of Polish Sex Education (forthcoming from Berghahn Books, Polish version 2017, Wydawnictwo Czarne), Gender, Pleasure, and Violence: The Construction of Expert Knowledge of Sexuality in Poland (Indiana University Press 2021, Polish version 2014, University of Warsaw Press), Potęga ciszy (The Power of silence: Gender and Religious Conversion, in Polish 2009, University of Warsaw Press) and (co-)editor of several volumes and journal special issues on gender and sexuality – the most recent being in English ‘The science of sex in a space of uncertainty: Naturalizing and modernizing Europe’s East, past and present’ Sexualities (no. 1-2, 2016, with Hadley Renkin); in Polish ‘Różowy język’ (‘Pink Tongue’), InterAlia: A Journal of Queer Studies (2019, no. 14, with Karolina Morawska, Jędrzej Burszta and Tomasz Basiuk). She also presented her work in non-academic formats. For instance, during her residency at Edinburgh College of Art in 2017 together with the artist Benny Nemerofsky Ramsay, she worked on a performance installation based on her research materials (letters to sexologists sent by Polish LGBTQ persons). The performance has been staged five times already, in the UK, Poland, and the Czech Republic.