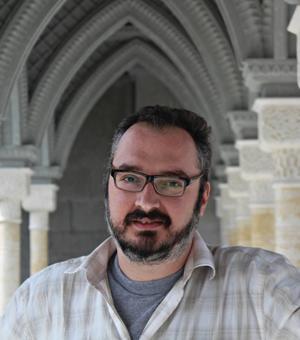 Dr. David Tinikashvili is working on the project: “A Significant Georgian Treatise (18th c.) on Western Christianity in the Context of Georgian-European Relationships” (2020-2021 academic year). In 2018 he spent three months as a visiting researcher at the Philosophisch-Theologische Hochschule (Frankfurt am Main, Germany), and in 2016-17 he was a post-doctoral researcher at Tallinn University, Estonia for a period of six months. From 2012 to 2015 he studied on the doctoral program at the Ilia State University (Tbilisi, Georgia). In 2014-15 (his dissertation completion year) he worked at Ghent University (Belgium). The title of his PhD thesis is: “The Political and Religious Relationship Between Georgians and Western Europeans in the 11-13th Centuries” (PhD in History). In 2014 he held a short-term fellowship (one month) at the University of Fribourg (Switzerland). In 1997-2003 he studied at the Tbilisi Theological Seminary (Orthodox Church of Georgia).

Dr. Tinikashvili recently published a peer-reviewed article: “The Orthodox Church of Georgia and the Ecumenical Movement (before and after 1997)”, Journal of Eastern Christian Studies 71:1-2, 2019, pp. 127-159. This is an extended version of a paper delivered at the seminar organized by the Institute of Eastern Christian Studies, Radboud University (Nijmegen, The Netherlands) in 2017. For the full list of the publications see his CV on academia.edu.

In 2009-10 he worked on the textbook “World Religions” (co-author Zurab Jashi) at the Caucasus Institute for Peace, Democracy and Development (CIPDD). The textbook was published by the Ilia State University Press in 2012.

In addition to teaching and research he has also made a contribution in terms of defense of religious freedom and making the unbiased reporting based on first-hand information about the activities of religious minorities, as well as writing the non-academic articles for the general public on religious matters of topical concern to Georgian society. The publications are available in Solidarity: Journal of Public Defender of Georgia (11 articles in 2006-2010) and on the web-page of the magazine Liberal (22 articles in 2012). In 2011-13 he also wrote articles about school education for the magazine Teacher (25 publications).

In 2013 David participated in a project of CCIIR (Intercultural Education Research in Primary Schools of Georgia). He analized seventeen school textbooks in terms of religious diversity. The results of the project will be available in the article: Shalva Tabatadze, Natia Gorgadze, Kakha Gabunia, David Tinikashvili. “Intercultural Content and Perspectives in School Textbooks in Georgia”, Intercultural Education 31:4 (July-August), 2020. (forthcoming).